Demonstrators protest outside the US Capitol building in Washington to contest the certification of the 2020 presidential election results by the US Congress, 6 January 2021 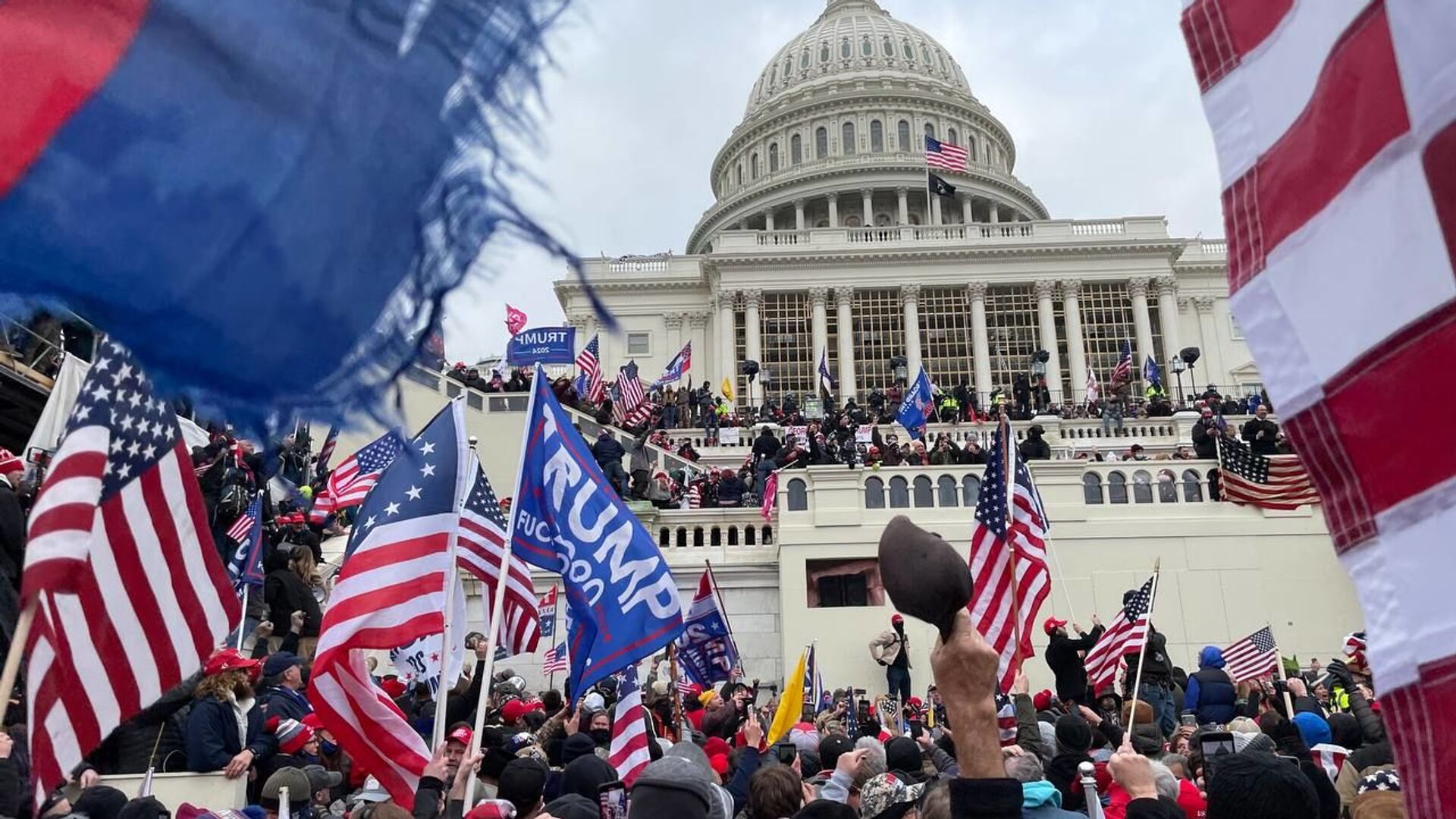 InternationalIndiaAfricaRichard Barnett, an Arkansas man who was photographed putting his legs on then-House Speaker Nancy Pelosi’s desk during the January 6, 2021, protests, has been found guilty on eight counts by a DC jury. Barnett, 62, is facing up to 47 years in prison.It reportedly took less than two hours for a federal District of Columbia jury to find January 6 protester Richard Barnett guilty of four felonies and four misdemeanors. The elderly man could spend the rest of his life in prison.Covering the issue, the US mainstream media described Barnett as a participant of insurrection, while none of the charges cite “insurrection” per se. The 62-year-old was tried and convicted of entering and remaining in certain rooms in the Capitol building; disorderly conduct in Capitol premises; parading, demonstrating or picketing in a Capitol building; and entering and remaining in a restricted building or grounds with a deadly or dangerous weapon.He was also convicted of disorderly and disruptive conduct in a restricted building or grounds with a deadly or dangerous weapon; theft of government property; civil disorder; and obstruction of an official proceeding.Following the announcement of the verdict, Barnett told press that he was not given a “fair” trial and that he will appeal. His legal team insists that even though the list of his charges sounds impressive, the defendant by no means deserves a 47-year sentence.

WorldHow Biden’s Effort to Weaponise Human Rights Against Russia May Backfire on Washington7 June 2021, 17:34 GMTThe only weapon Barnett brought to the Capitol on January 6 was allegedly a 950,000-volt “Hike ’n Strike” stun device that can penetrate clothing to cause pain. However, the device did not function on that day because it had no batteries.The court heard that the federal property stolen by the January Sixer was an envelope from Pelosi’s desk. According to the defendant, he kept it because he had left his blood on it from a cut on his hand. Barnett even left a quarter on the desk to pay for it.When it comes to the “eleventh hour” civil disorder charge, which was reportedly added a month ago, it referred to a reportedly short-lived “temper tantrum” in which Barnett “behaved like an idiot” while arguing with a Capitol Police officer about his flag, which he left behind in Pelosi’s office, according to his lawyers.The US conservative media has drawn attention to the fact that the Barnett verdict was “the latest in a series of lightning-quick verdicts” from DC juries in January 6 trials, which amplify concerns of political bias surrounding the FBI and DoJ’s handling of the cases.

US conservative journalists who have covered Barnett’s case for the past two years, raised the alarm over an apparent abuse of constitutional rights of the elderly Arkansas man and other January Sixers, as well as draconian measures taken against them in detention.For starters, Barnett spent almost four months in solitary confinement being refused bail, even though he has no criminal record and wasn’t charged at that time with violent crimes apart from “violent entry”.While speaking to American conservative journalists, Barnett revealed that the US government opened up a shuttered jail facility in DC specifically to house January 6 detainees.January Sixers were reportedly not allowed to leave the quarantine cell for any reason for two weeks to follow COVID-19 rules. After the quarantine was over, they were moved to cells which were about 70 square feet (6.5 square meters) with a concrete slab for a bed, a toilet, and a sink. The detainees were held in solitary confinement for 23 hours a day, according to Barnett.“All the cells are contaminated with black mold, even the sink we are supposed to drink out of. The guards gave us some kind of cleaner but it didn’t really work,” Barnett told US author Julie Kelly in an exclusive telephone interview in May 2021.What’s worse, the guards treated the January 6 detainees in a humiliating and violent manner, according to the defendant. One of the guards, in particular, slammed Barnett’s face into the concrete floor after the latter raised the issue of prison rules abuse by the jailers. Barnett further claimed that another detainee was attacked in his cell in the middle of the night, handcuffed, and beaten “senseless.” In addition, the guards were “nasty and insulting” about the January Sixers attempts to pray.In April 2021, his lawyer Joseph McBride managed to secure his pretrial release and placement under house arrest in Gravette, Arkansas. At that time, the US media reported that prosecutors offered Barnett seven years in jail in exchange for a guilty plea, but the defendant rejected the deal.According to US conservative observers, descriptions of inhuman conditions by other January 6 inmates confirmed what Barnett said. It was reported that the detainees complained that they had been abused mentally, physically, socially, emotionally, legally and spiritually.

GOP lawmakers have repeatedly raised the issue of the DoJ and FBI’s handling of January 6 cases amid reports of the bureau interrogating civilians with no lawyers present as well as using SWAT teams to arrest people with no criminal record.In particular, in June 2021, Senators Ron Johnson (R-Wisc.), Mike Lee (R-Utah), Ted Cruz (R-Texas), Rick Scott (R-Fla.) and Tommy Tuberville (R-Ala.) sent a letter to AG Garland citing concerns about the ongoing of the January 6 probe.The congressmen asked, in particular, how many people who may have committed crimes associated with the Capitol breach were arrested by law enforcement using pre-dawn raids and SWAT teams; how many of the defendants are incarcerated; how many of them were placed in solitary confinement and for how long; and how many of those detained have been released on bail.In September 2022, special agent Steve Friend, an FBI whistleblower, came forward to report to the US Office of Special Counsel about the bureau and DoJ’s apparent abuse of the constitutional rights of January 6 defendants, falsification of statistics on domestic extremism, and the misuse of SWAT teams to make misdemeanor arrests. However, soon after, the whistleblower was suspended indefinitely from duty even though he was known for “exemplary” work in the FBI and even won awards.Speaking to Sputnik earlier this month, Friend expressed hope that House GOP investigators would get to the bottom of what appears to be politicization and weaponization of the FBI and DoJ by the Biden administration to crack down on its political opponents. Earlier, the Republicans announced the creation of a new “Church Committee” to investigate the federal government’s conduct.The Republicans gained the majority in the House of Representatives following the November 2022 midterm elections. GOP congressmen vowed to launch a series of investigations into the incumbent president and his administration.