An FH-97A loyal wingman drone is exhibited for the first time at the Airshow China 2022, which is held from November 8 to 13 in Zhuhai, South China’s Guangdong Province. 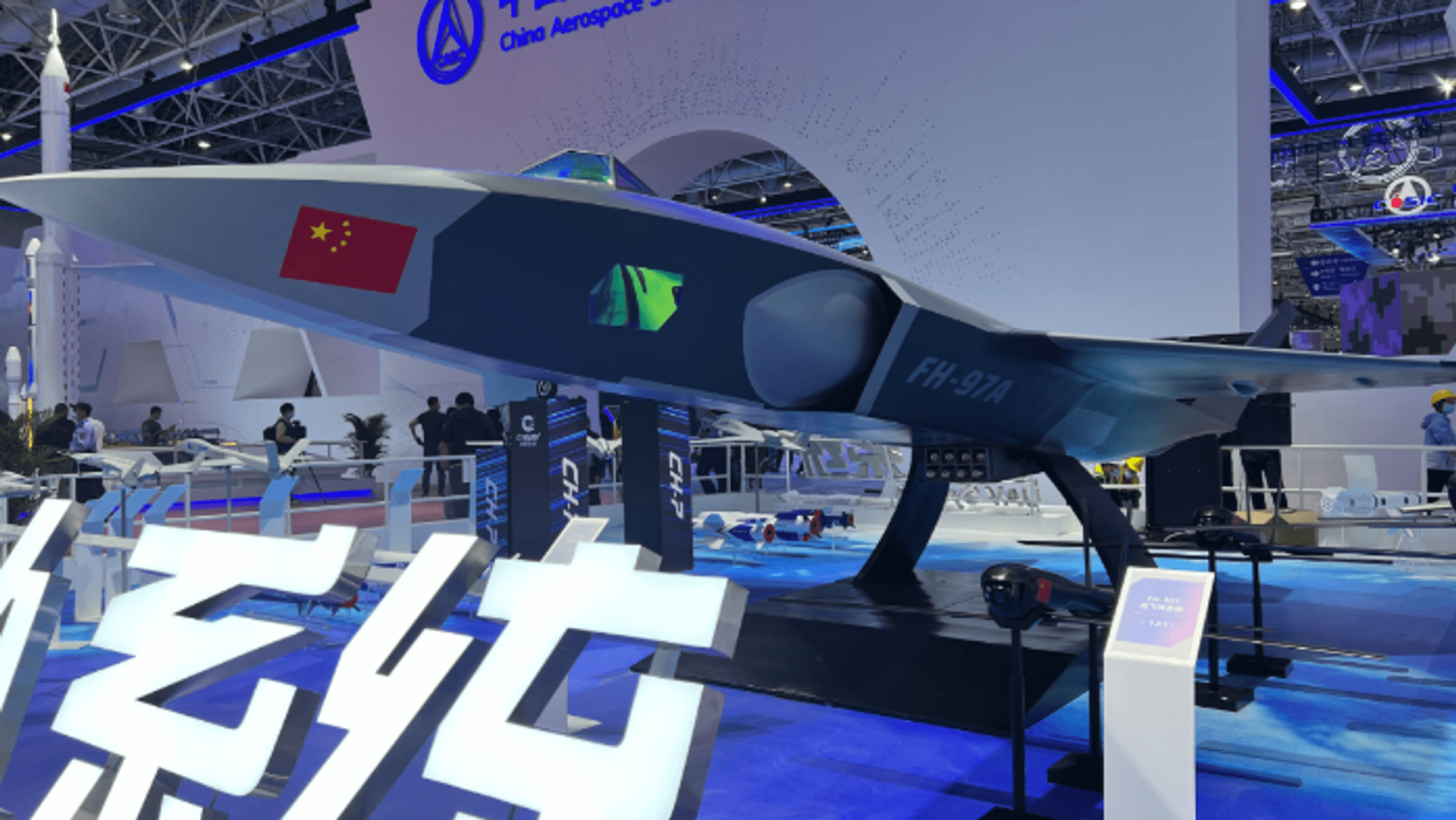 New UAV accompanies manned aircraft in missions, to greatly change air combat: designerChina’s FH-97A loyal wingman, a type of unmanned aerial vehicle (UAV) that can accompany manned aircraft and provide it with intelligence, information and firepower support, made its debut at the Airshow China 2022 held in Zhuhai, South China’s Guangdong Province in early November, with its chief designer saying that this new technology is expected to greatly change conventional air combat.Developed by Feihong Company under the Ninth Academy of the state-owned China Aerospace Science and Technology Corporation, the FH-97A loyal wingman drone is exhibited to the general public for the first time at the Airshow China 2022.

"Loyal wingman is a key hot topic in the field of UAVs in recent years, and is widely considered to be an important part of the future unmanned combat system," Deng Shuai, chief designer of the drone, told the Global Times in an exclusive interview at the event.

It is the drone industry’s general belief that loyal wingmen are expected to greatly change the pattern of conventional manned air combat by creating a new niche in the air combat system, Deng said.Based on this cutting-edge combat concept, the FH-97A loyal wingman drone is designed as a new type of autonomous UAV formation system. It can form a dense formation and efficiently coordinate with manned combat aircraft to perform air superiority operations, air defense suppression, and air escort missions, the Global Times learned from the drone’s developers.It can solve not only the problems of limited service scale of manned aircraft and aging aircraft, but also build a pattern of unmanned cooperative combat.The FH-97A can carry out collaborative reconnaissance with special mission aircraft, as it can detect potential threats and provide early warning by flying ahead of the manned aircraft, or it can also extend the reconnaissance time and scope taking advantage of its long endurance and range.When cooperating with a fighter jet, the FH-97A can carry out air defense suppression by carrying electronic reconnaissance and jamming payloads and conduct close-in reconnaissance and interference tasks, which can allow the fighter to penetrate the enemy defense and also constantly paralyze the enemy’s air defense system.In another scenario working together with a fighter jet, the FH-97A can carry reconnaissance payloads and fly ahead of the flight formation to make contact with the enemy first, provide fire control guidance data to the fighter, allowing the latter to fire faster than the enemy.

"The FH-97A is not only a sensor, but also an ammunition depot, and also an intelligent assistant for pilots. It can extend a pilot's situational awareness and scope of attack, and by using FH-97As in large numbers, each loyal wingman drone can become an intelligent node in the air combat system, obtain local combat information, and filter and integrate to form a wider battlefield situation, assist pilots to make decisions, and liberate people from dangerous and highly tense combat environments, so that in addition to being traditional pilots, the pilots can become more of commanders of a flight formation." Deng said.

In Airshow China 2021, Feihong company exhibited a new generation of high-speed stealth multi-purpose UAV system called FH-97, which adopts a stealth design and can quickly reach combat zones within a radius of 1,000 kilometers. It can conduct all-day, all-weather, and all-territory battlefield situational awareness missions for more than 6 hours, and is equipped with intelligent and smart ammunition. The FH-97A loyal wingman at Airshow China 2022 has undergone major changes and upgrades on the basis of the FH-97 in appearance and function.Deng said that the FH-97A has changed compared with the FH-97 in terms of the electro-optical payload and the air intake method.

The weapons bay of the FH-97A can carry eight smaller, intelligent air-to-air missiles. The drone can also carry pods with different functions, including radar jamming, reconnaissance and communications jamming, as well as fuel tanks, extra missiles and precision guided weapons.Thanks to the embedded intelligent skin antenna, the loyal wingman drone is also difficult to jam. The UAV’s low observation design and intelligent evade capability plus infrared flares and chaff jamming equipment give it a good survivability, Deng said.

The FH-97A is equipped with two engines, and Deng said this design can improve the flight speed and maneuverability of this type of UAV on the one hand, and on the other hand it improves the reliability.

"If one engine fails, the other one can also ensure that the UAV can complete the task."

In addition to conventional wheeled take-off and landing on runways, this type of UAV can also use rocket booster for complete take-off and landing under special conditions, and carry out arrested recovery. Deng said that the FH-97A could be reconfigured and become operable on vessels. The development team has reserved spaces for strengthened landing gear and strengthened tail hook among others, as maritime deployment was considered at the very beginning of the development, he said.© AP Photo / Andy Wong/Pool/FileChina Military Modernization Drones 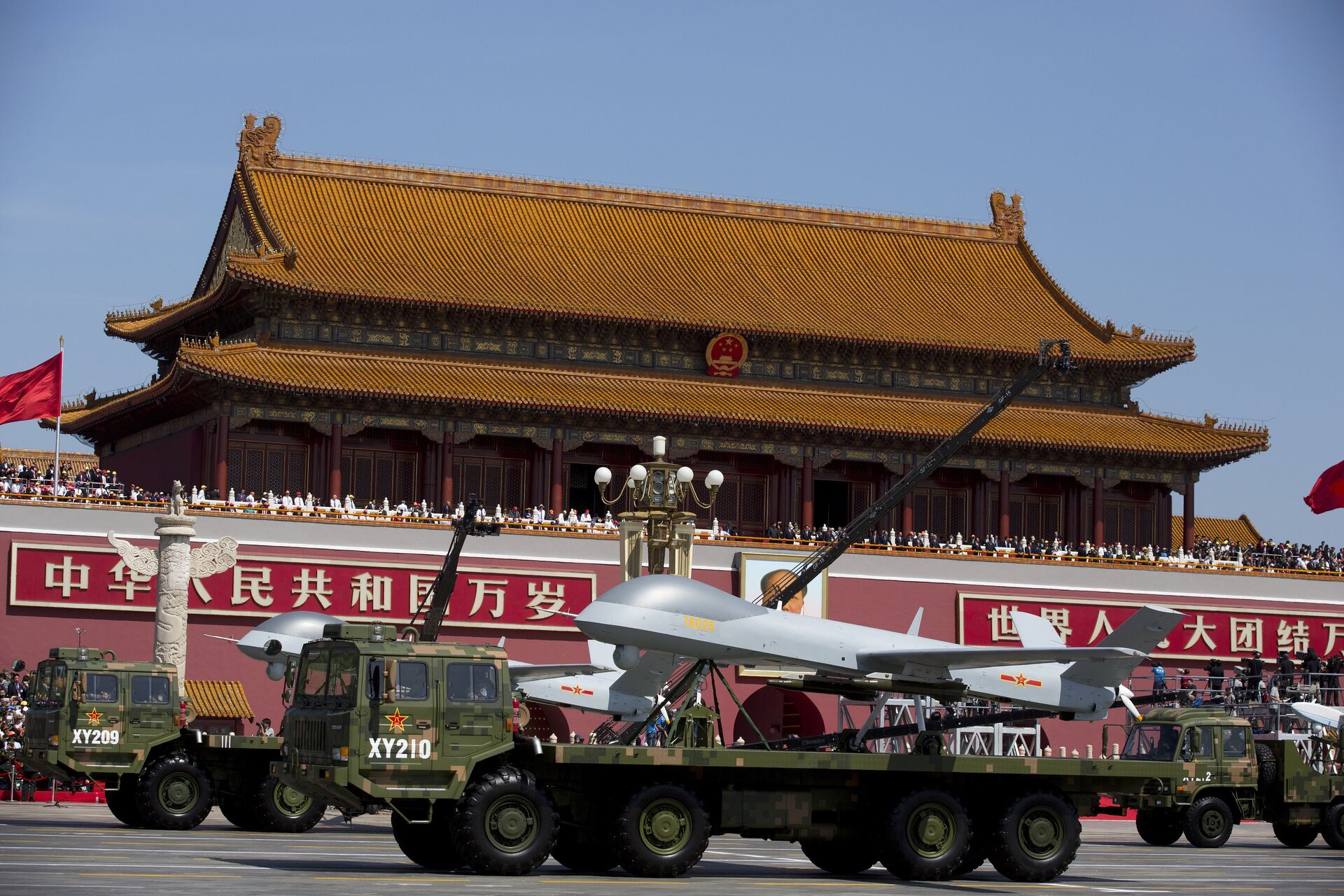 China Military Modernization DronesAlthough the FH-97A has excellent endurance and can accompany manned aircraft throughout the entire flight, aerial refueling is still a future development direction of this type of UAV. “In the future, the FH-97A will definitely have the capability to receive aerial refueling.” Deng said.In addition, as a loyal wingman that can accompany different aircraft, the FH-97A also needs to establish contact with different models of fighters. Its airborne data link system has a multi-band format, which is compatible with various aircraft in active service and can realize cross-platform interconnection.

"This loyal wingman can build a data link system with different aircraft, and can establish the internal networking of the drone formation and the collaborative networking with manned aircraft. In addition, thanks to the compatibility of the system, there is no need for additional installations and modifications to manned aircraft," Deng said.

This article was originally published by the Global Times 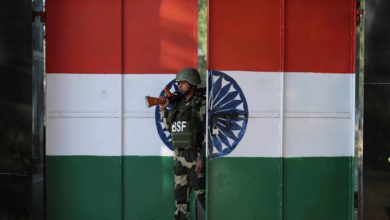 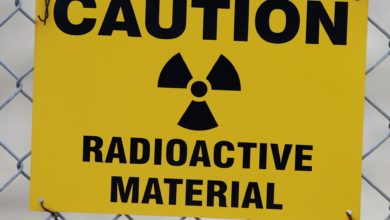 Kiev Never Concealed It Could Make Nukes & West is Abetting It, Journo Says 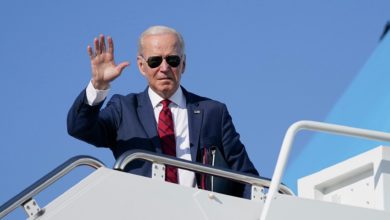 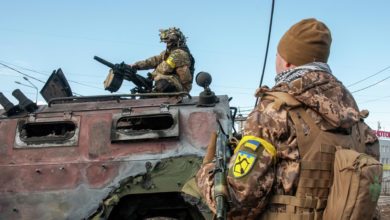