Former President Donald Trump speaks at a rally at the Delaware County Fairgrounds, Saturday, April 23, 2022, in Delaware, Ohio, to endorse Republican candidates ahead of the Ohio primary on May 3. 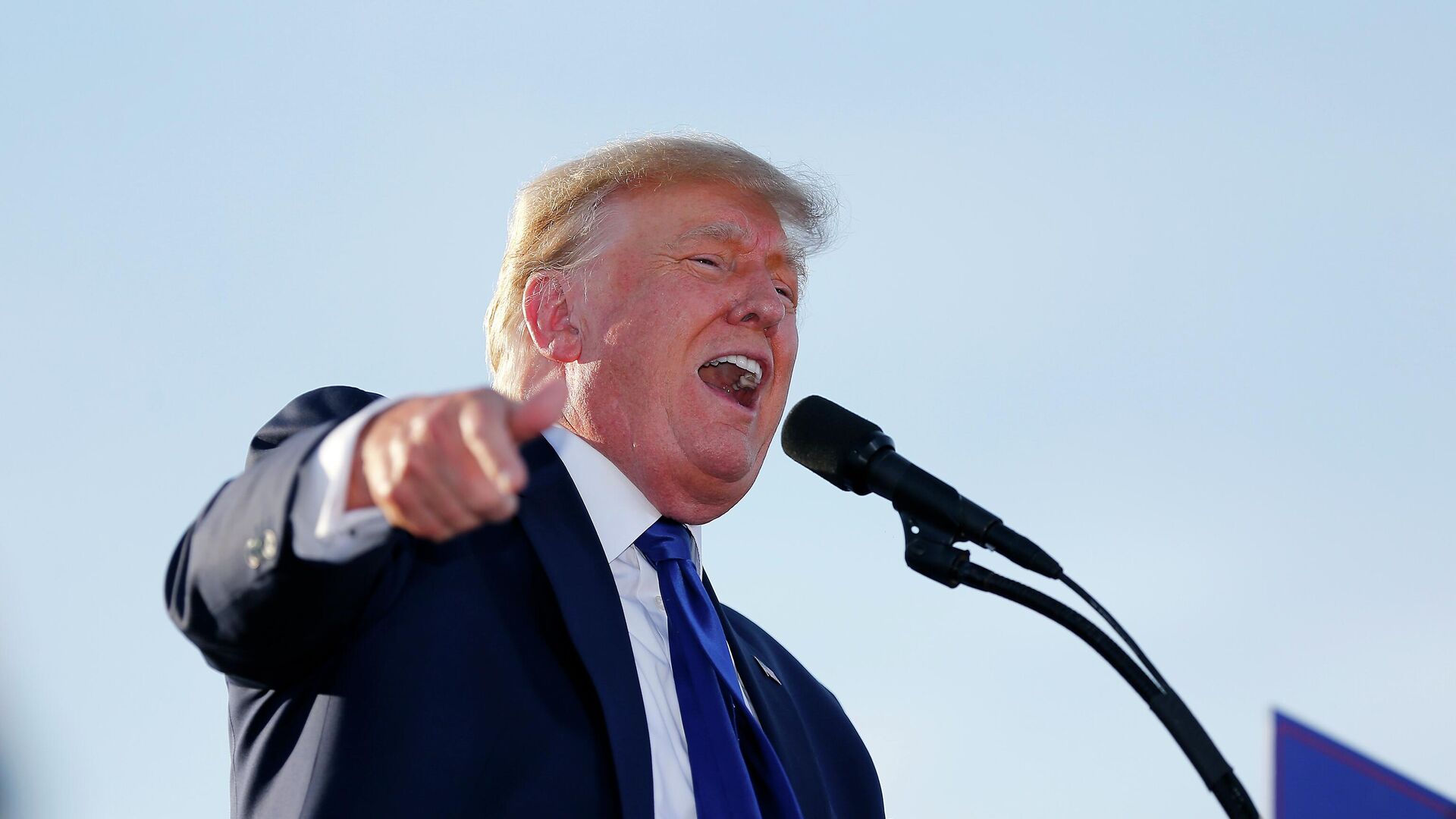 Americans are casting their ballots in the midterm elections across the country, and polls suggest there may be a major red wave, with Republicans potentially taking over the House of Representatives. Such a shift will inevitably raise the question of a return of Donald Trump during the 2024 presidential race, despite his ongoing legal troubles.Sputnik interviewed Timothy M. Hagle, an associate professor at the University of Iowa and a specialist on US politics, discussing the dynamics of US politics and a possible return of the 45th president to the White House.Sputnik: How has Trump’s position changed since 2022?Timothy M. Hagle: There are two ways to interpret this question. If you mean has Trump changed his mind about things, that’s hard to say. He’s been hinting about running in 2024 for some time. There was some speculation that he might make an announcement before the midterm elections but he decided to hold off, possibly to wait to see the outcome.That leads to the second interpretation of the question. Namely, might Trump’s chances of getting the Republican nomination and winning the presidential election have changed? The answer to that might depend a bit on the outcome of the midterm elections and particularly some individual races.Trump largely did the right thing in the lead up to the midterm elections. He didn’t pick a lot of fights (despite some comments about De Santis) and he went out on the campaign trail to hold rallies for several candidates. He also didn’t do things that took attention away from the arguments Republicans were making about the poor economy, etc. That kept the focus on the problems Democrats were having. As a result, Trump took on a more traditional role of senior party leader. That leads to you next question.© AFP 2022 / DUSTIN FRANZAn official ballot collector for the Cuyahoga County Board of Elections gives a voter their “I Voted” sticker after depositing their mail-in ballots into a collection box in Cleveland, Ohio on November 6, 2022, ahead of the midterm elections 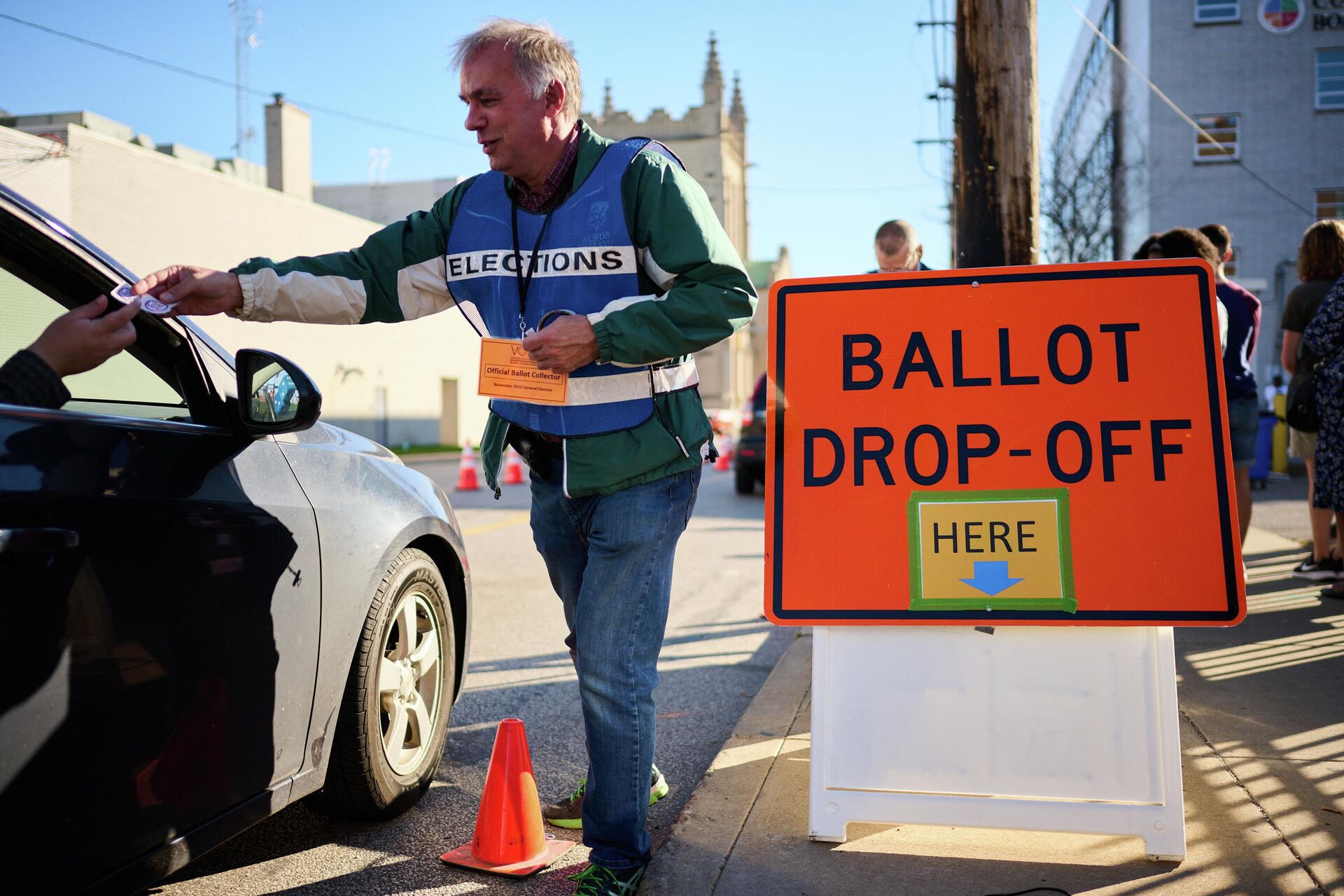 An official ballot collector for the Cuyahoga County Board of Elections gives a voter their “I Voted” sticker after depositing their mail-in ballots into a collection box in Cleveland, Ohio on November 6, 2022, ahead of the midterm electionsSputnik: What are his chances of returning to the White House now, provided that more than half of Americans support the Republicans?Timothy M. Hagle: Although it still depends a bit on the overall outcome of the midterms, Trump’s chances of getting the nomination and winning the presidential election have probably improved. It will also depend a bit on some of the races where Trump endorsed a candidate in the primary who many Republicans didn’t think had the best chance of winning, Pennsylvania being a good example of that.If the candidates Trump endorsed early end up winning it would improve his chances as it would be harder to argue against his political instincts. That said, Trump’s comment about De Santis may have hurt him as it was a return to Trump’s combative style at a time when it wasn’t necessary and could have been harmful given that it was just before the midterm elections.It’s an odd situation in that we don’t know whether Trump will decide to run again and it’s not entirely clear that Biden will run again. Some assume both would easily get their party’s nomination, but I’m not so sure. I think if Trump decides to run again he could get some competition as some voters who supported him would nevertheless like to move on to a new generation of leaders. That would also be true for Biden, but Biden’s bigger problem would be that many Democrats may see him as a major reason for their losses.Sputnik: What other attempts to discredit Trump and the Republican Party can we expect from the Democrats?Timothy M. Hagle: I’m not sure we’ll see anything different from what we’ve already seen. In other words, just more of the same. If Republicans do very well in the midterm elections and take control of one or both chambers of Congress, Democrats will likely argue that this is evidence of their fears about the “end of democracy” coming true.© AFP 2022 / KAREN BLEIERThe symbols of the Democratic(L) (donkey) and Republican (elephant) parties are seen on display in Washington, DC on August 25, 2008. 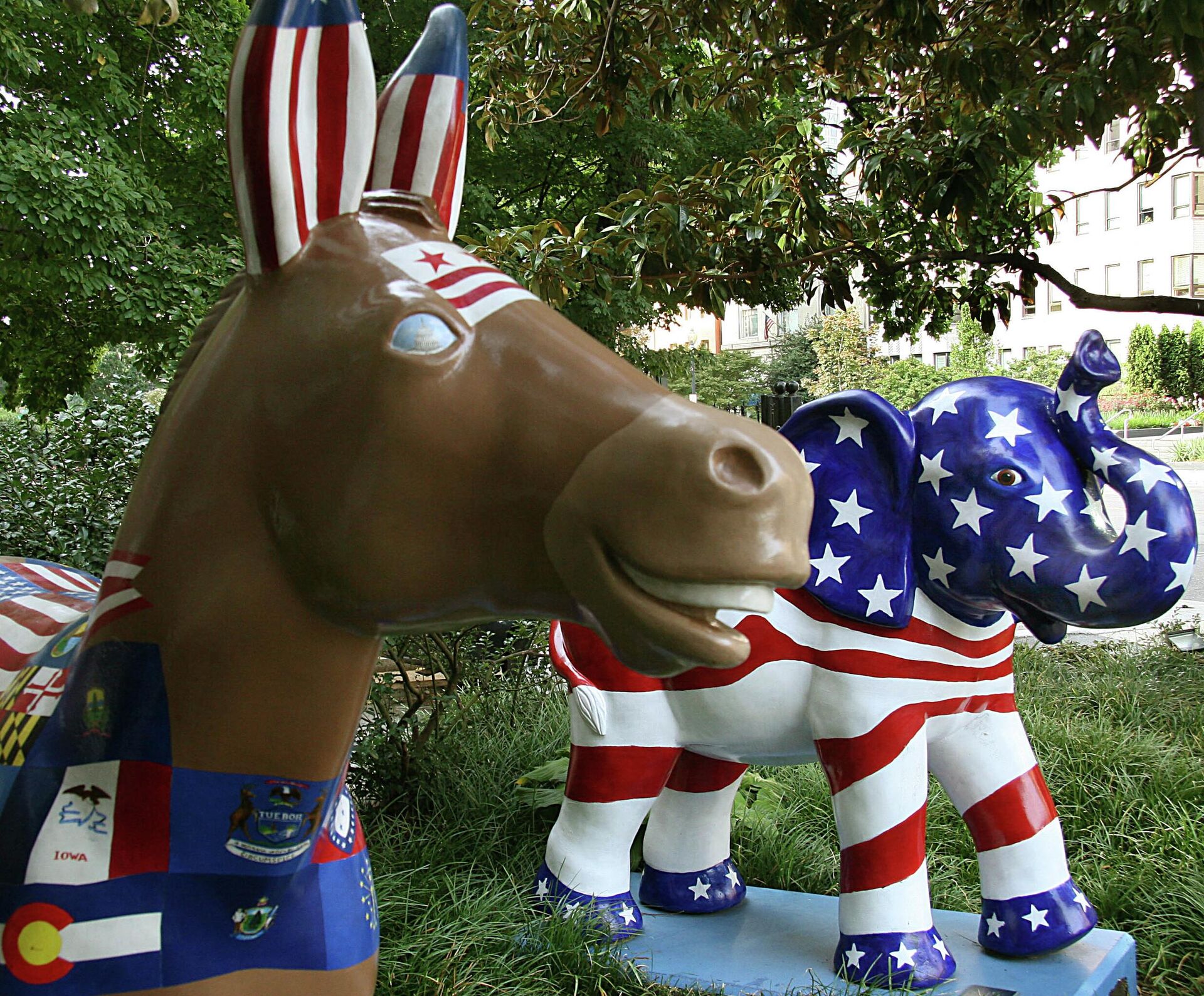 The symbols of the Democratic(L) (donkey) and Republican (elephant) parties are seen on display in Washington, DC on August 25, 2008.Sputnik: Will they be able to influence the outcome of the elections?Timothy M. Hagle: The Democrats’ arguments will likely influence some voters. We know that voter turnout in midterms elections is lower than in presidential elections. The drop for Democrats tends to be a bit more than for Republicans. If one party tends to be dispirited about the election it makes the problem worse. That’s one reason why Democrats have worked hard to motivate their base and emphasized issues like abortion. Along similar lines, fear is often a better motivator than saying good things.By stoking fear among its base voters Democrats are hoping to keep them motivated so they turnout in higher numbers. The problem with that approach is that the other side gets motivated as well in opposition to those same arguments and the middle voters tend to be turned off by them.Sputnik: What do the attempts to play the “election interference” card tell us about the current mood within the Democratic party?Timothy M. Hagle: The mood is not good with Democrats as we head into Election Day. They basically realize that the elections will go badly for them and their strategies haven’t worked. Rather than accept responsibility for the problems it is easier to try to place the blame elsewhere. 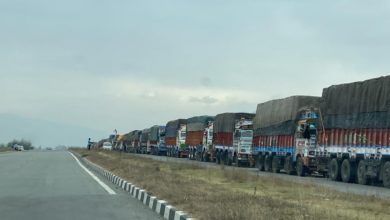 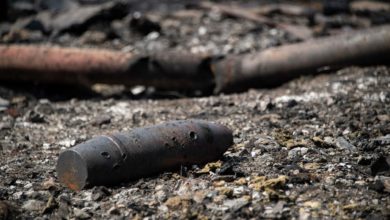 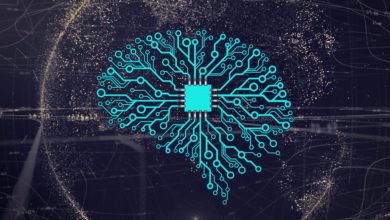 Artificial Intelligence Not a Rival to Humans, They Complement Each Other, IT Enterpreneur Says 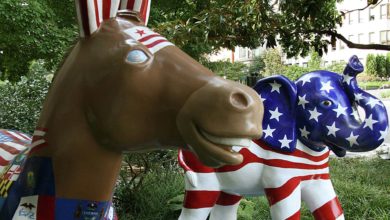