/ Go to the mediabankThe diary of Tanya Savicheva at the museum in the Piskaryovo Memorial Cemetery where about 500,000 victims of the siege of Leningrad and soldiers of the Leningrad Front are buried 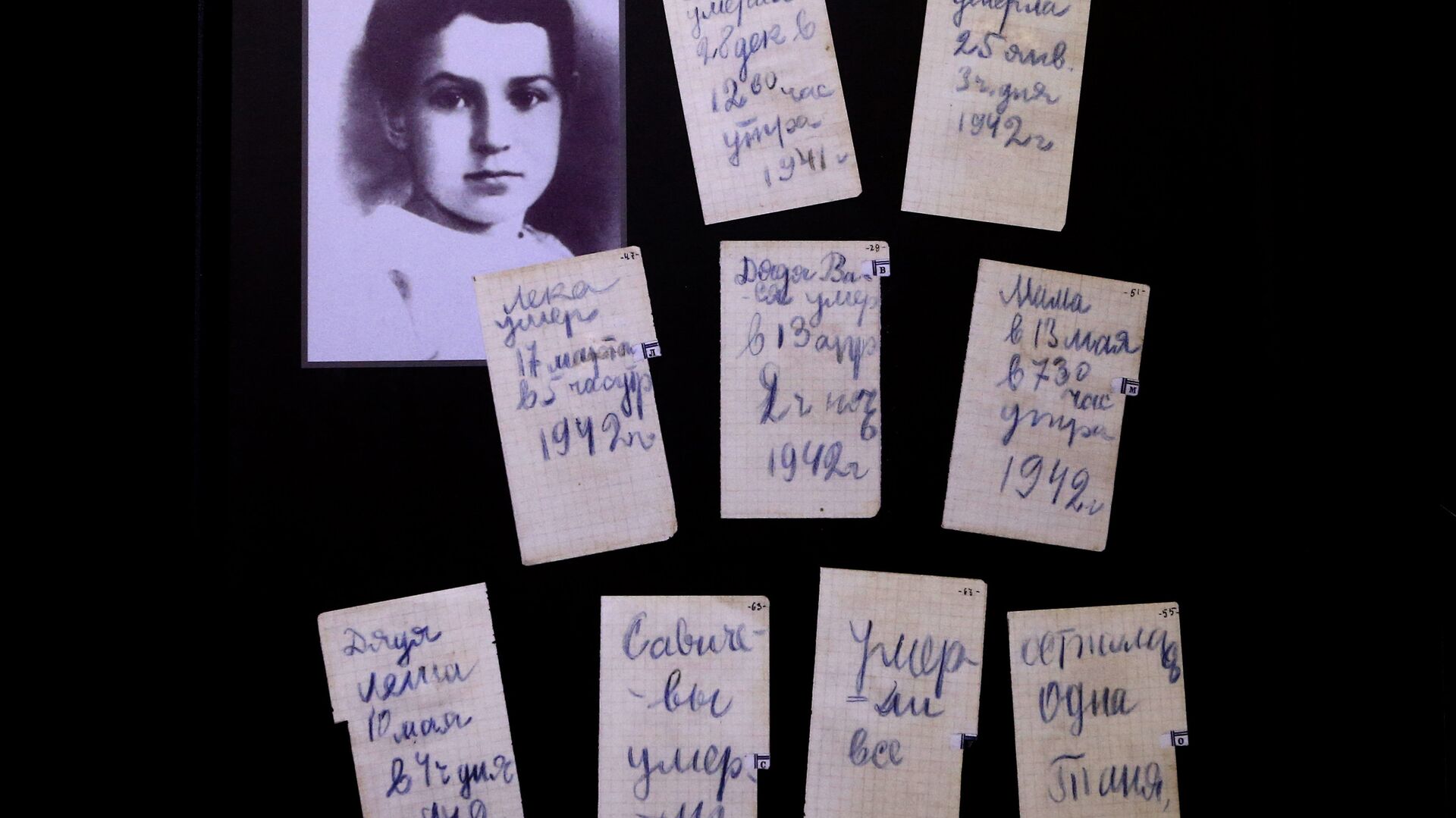 / Go to the mediabankInternationalIndiaAfricaA Soviet schoolgirl’s diary of just a few pages kept during the siege of Leningrad is no less harrowing than the globally published memoirs of German-born Jews Anne Frank and her girlhood friend Hanna Goslar narrating their personal experiences during WWII and epitomizing the horrors of the Holocaust.In her brief diary, Soviet schoolgirl Tanya Savicheva managed to capture the entire essence of the devastating 900-day Siege of Leningrad during World War II, when thousands of civilians starved and froze to death. Yet how poignant those entries written in a faltering hand are, as she recorded the date and time when each member of her beloved family died, until she was the only one left. The heart-rending journal was presented at the Nuremberg Trials as evidence of Nazi atrocities. Here is a brief look at how the personal drama of one family in just a few scant phrases reflected the tragedy of millions of households in the war-torn city of Leningrad.Tanya Savicheva was born on January 23, 1930, the youngest child in her family of two sisters, Nina and Zhenya, and two brothers, Mikhail and Leka. Her father, who died before the war, in 1936, had been a baker, and her mother was a seamstress. At the end of May 1941, Tanya Savicheva graduated from the third grade at school. In 1941, the family originally planned to go to the countryside to spend the summer with relatives in the village of Dvorishchi, but by June 22, 1941, when the Great Patriotic War broke out, only Tanya’s older brother Mikhail had managed to set off for the rural settlement. After the beginning of the war, the Savichevs decided to stay in the city to contribute to the war effort. Tanya’s brother Leonid, due to myopia, was not taken into the army, and he stayed on to work at the shipbuilding factory in the city. As part of Hitler’s offensive against the USSR, Operation Barbarossa, on September 8, 1941, German forces closed in around Leningrad. Hitler’s forces laid siege to the city (now St. Petersburg) until January 1944, with the Nazi’s bombarding the city and choking off all supplies. Leningrad was to be “erased from the face of the earth,” according to Hitler’s plan.© Sputnik / Sputnik / Go to the mediabankOne of the few remaining photos of Tania Savicheva (1933-1944) held by Tania’s survivors -sister Nina Savicheva (right) and brother Mikhail (left). During the Great Patriotic war (1941-1945) Tania Savicheva kept a diary about the life in besieged Leningrad. The diary was subsequently used as an indictment of fascism at the Nuremberg process in 1945 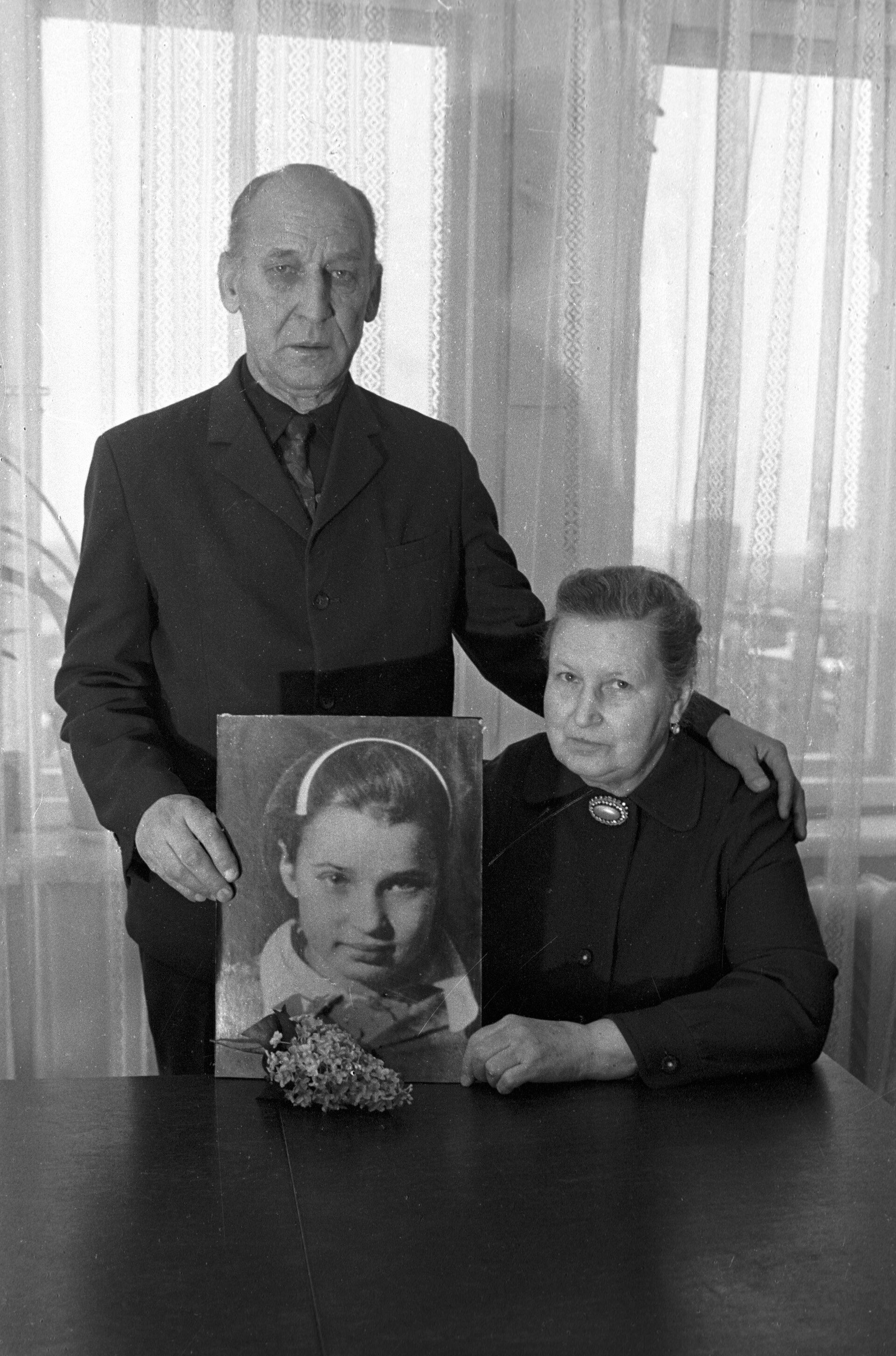 One of the few remaining photos of Tania Savicheva (1933-1944) held by Tania’s survivors -sister Nina Savicheva (right) and brother Mikhail (left). During the Great Patriotic war (1941-1945) Tania Savicheva kept a diary about the life in besieged Leningrad. The diary was subsequently used as an indictment of fascism at the Nuremberg process in 1945 / Go to the mediabankAmid starvation, exposure to freezing temperatures, disease, and merciless shelling, the entire Savichev family responded to the call to help bolster the city’s defenses. Tanya, only 11 years old, helped dig anti-tank trenches, while her mother tirelessly sewed uniforms for the soldiers. Tanya’s sister Zhenya worked at an enterprise that produced casings for mines, and despite her growing emaciation, continued to donate blood for the wounded. Her sister Nina was mobilized for defense work, while Tanya’s uncles served in the air defenses.Over some of the most harrowing periods of the 900-day siege, people were rationed only 150 to 250 grams of bread daily – a mere fraction of the calories needed to sustain life. People would queue in the freezing winter temperatures for as long as 12 hours, at times, to receive their rations. From sawdust and cellulose added to the bread, to wallpaper, boiled carpenter’s glue, and leather – people ate anything to survive. © RIA Novosti . Boris Kudoyarov  / Go to the mediabankLeningrad during the siege in WWII. 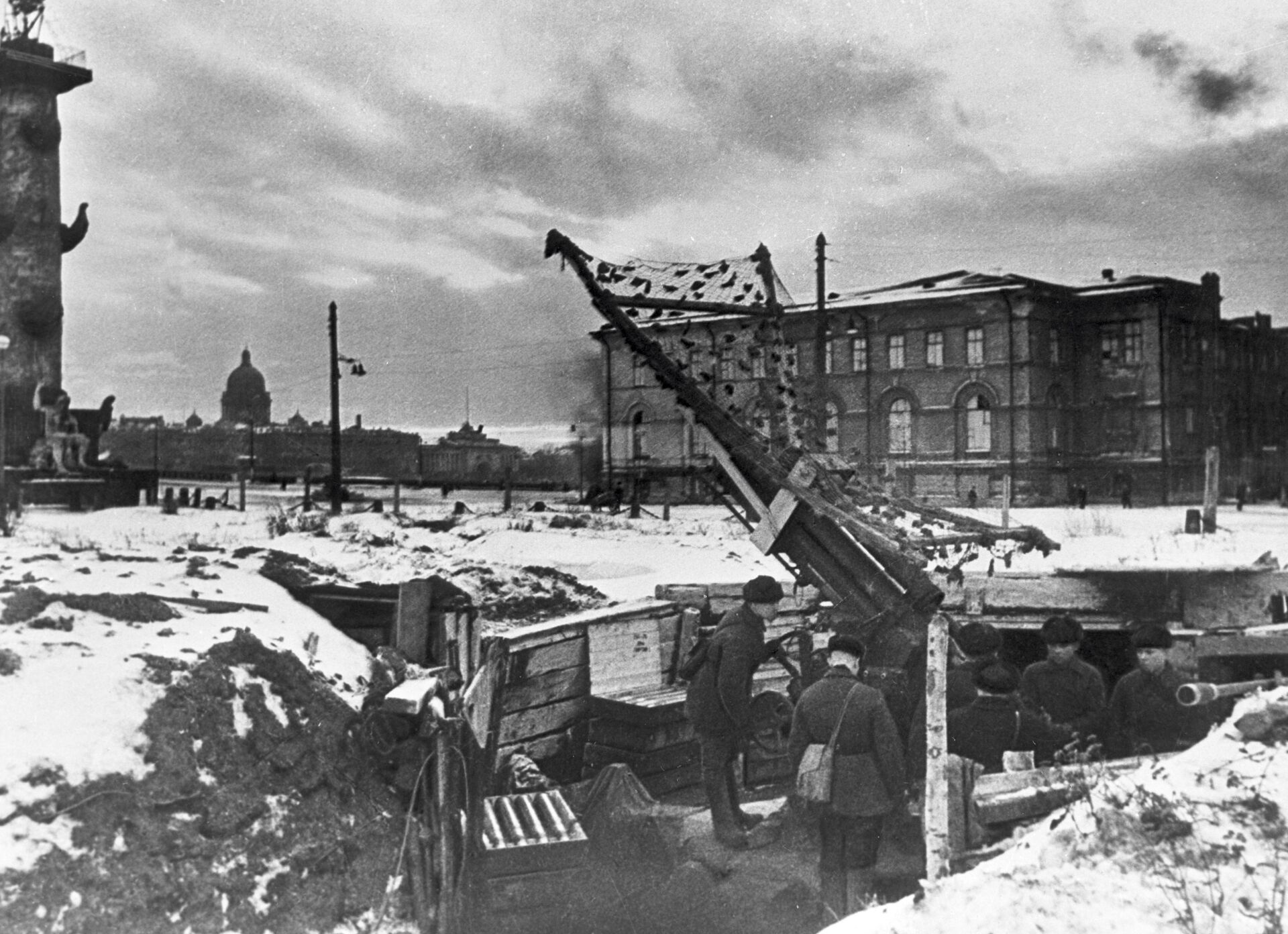 Leningrad during the siege in WWII. / Go to the mediabankFurthermore, the starving residents of the city had to contend with the piercing cold. In the first winter of the blockade, temperatures reached lows of -40°C. Despite this struggle for survival, remarkable fortitude was shown by the people of Leningrad. There were even theater performances, and museums were open while the city remained under German fire.An estimated one million inhabitants died during the siege of the city, which Hitler had repeatedly demanded be razed to the ground with its population completely destroyed. More than 600,000 of these people perished due to hunger. © RIA Novosti / Go to the mediabankLeningrad under siege in WWII. 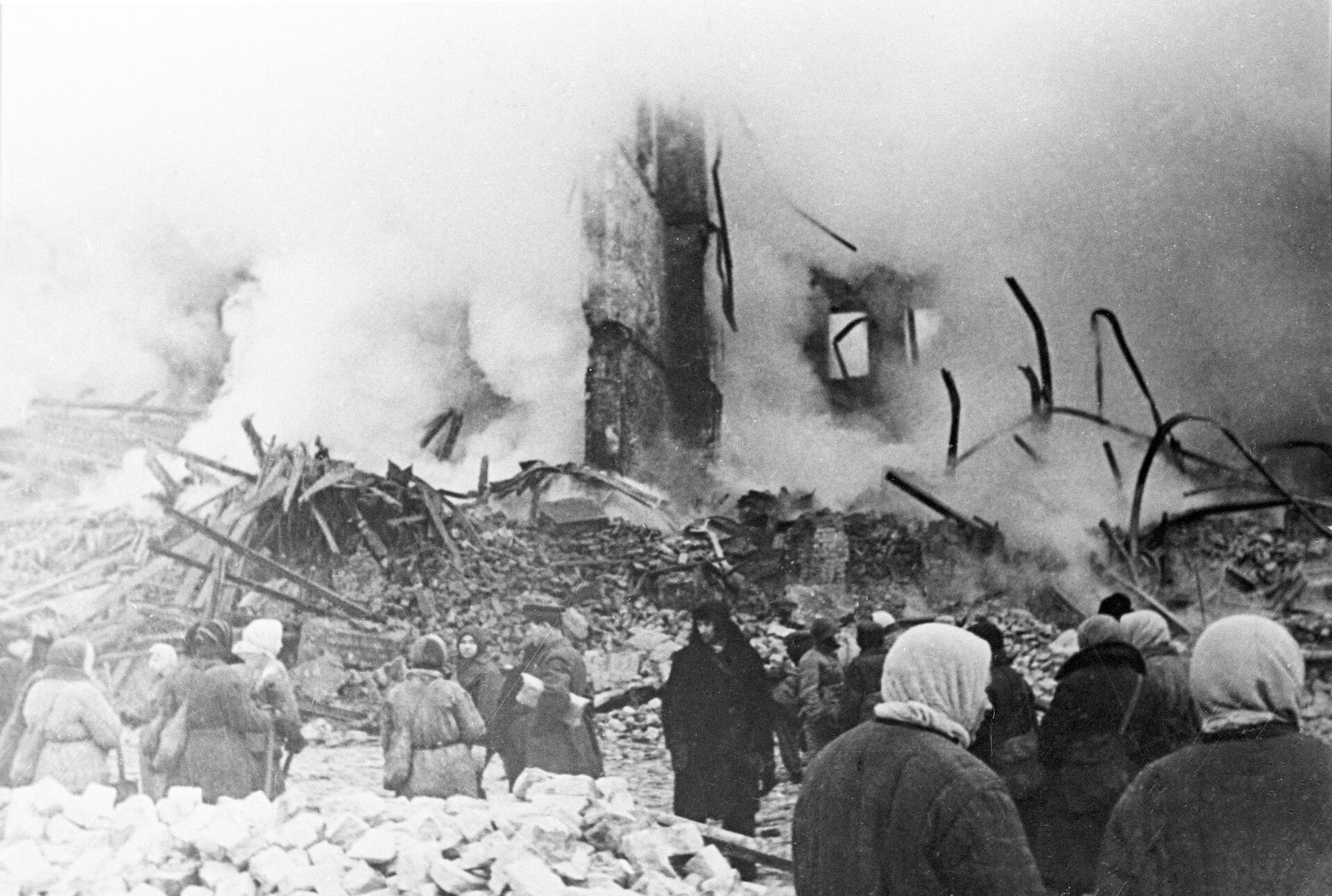 Leningrad under siege in WWII. / Go to the mediabankThere was only one opening out of the encircled city – across frozen Lake Ladoga in the winter months. The perilous route, which was commonly called the Road of Life, was constantly under German fire, but it offered the only way people for to be evacuated and most importantly, supplies brought into the city. During the siege, nearly 1.5 million people were able to escape across Lake Ladoga, while more than 1.5 million tons of food were delivered to the residents of Leningrad over the ice.© RIA Novosti . Vsevolod Tarasevich / Go to the mediabankResidents of Leningrad in WWII. 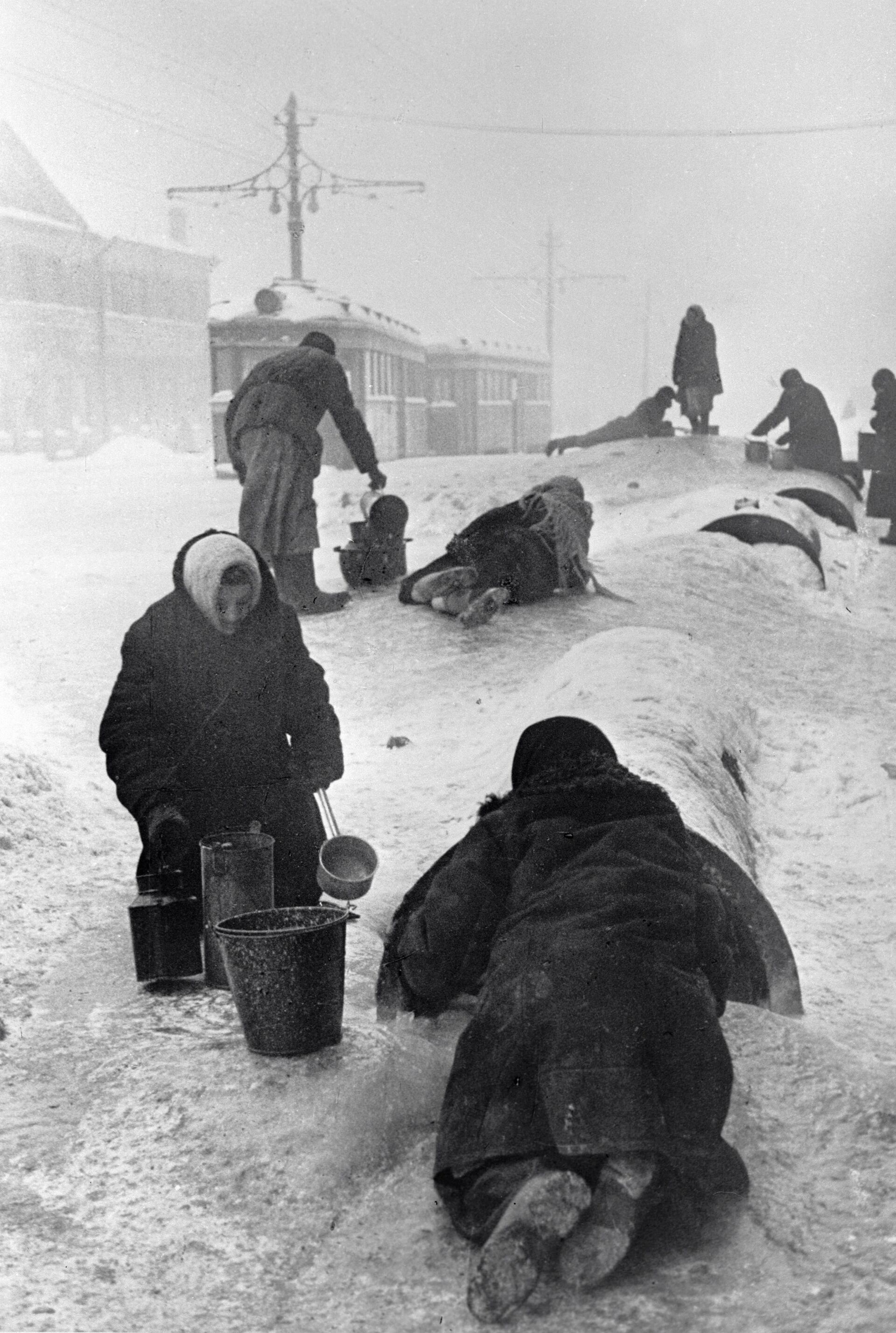 Residents of Leningrad in WWII. / Go to the mediabankAs hunger and illness took its toll on Tanya’s emaciated family members, one by one they died, their passing recorded in entries in her notebook. The first entry recorded the death of her sister, Zhenya, who passed away on December 28, 1941 at the munitions factory where she had been struggling to work double shifts. Others were to follow soon. The two missin siblings – sister Nina, 12 years older than Tanya, and Mikhail, were assumed to have died by the family. Finally the death of Tanya’s mother came on May 13, 1942. The excruciatingly brief, but heartbreaking text of Tanya’s notebook reads:Zhenya died on Dec. 28th at 12:00 P.M. 1941Grandma died on Jan. 25th at 3:00 P.M. 1942Leka died on March 5th at 5:00 A.M. 1942Uncle Vasya died on Apr. 13th at 2:00 after midnight 1942Uncle Lesha on May 10th at 4:00 P.M. 1942Mother on May 13th at 7:30 A.M. 1942Savichevs died.Everyone died.Only Tanya is left.© Sputnik / Boris Kudoyarov  / Go to the mediabankResidents of Leningrad 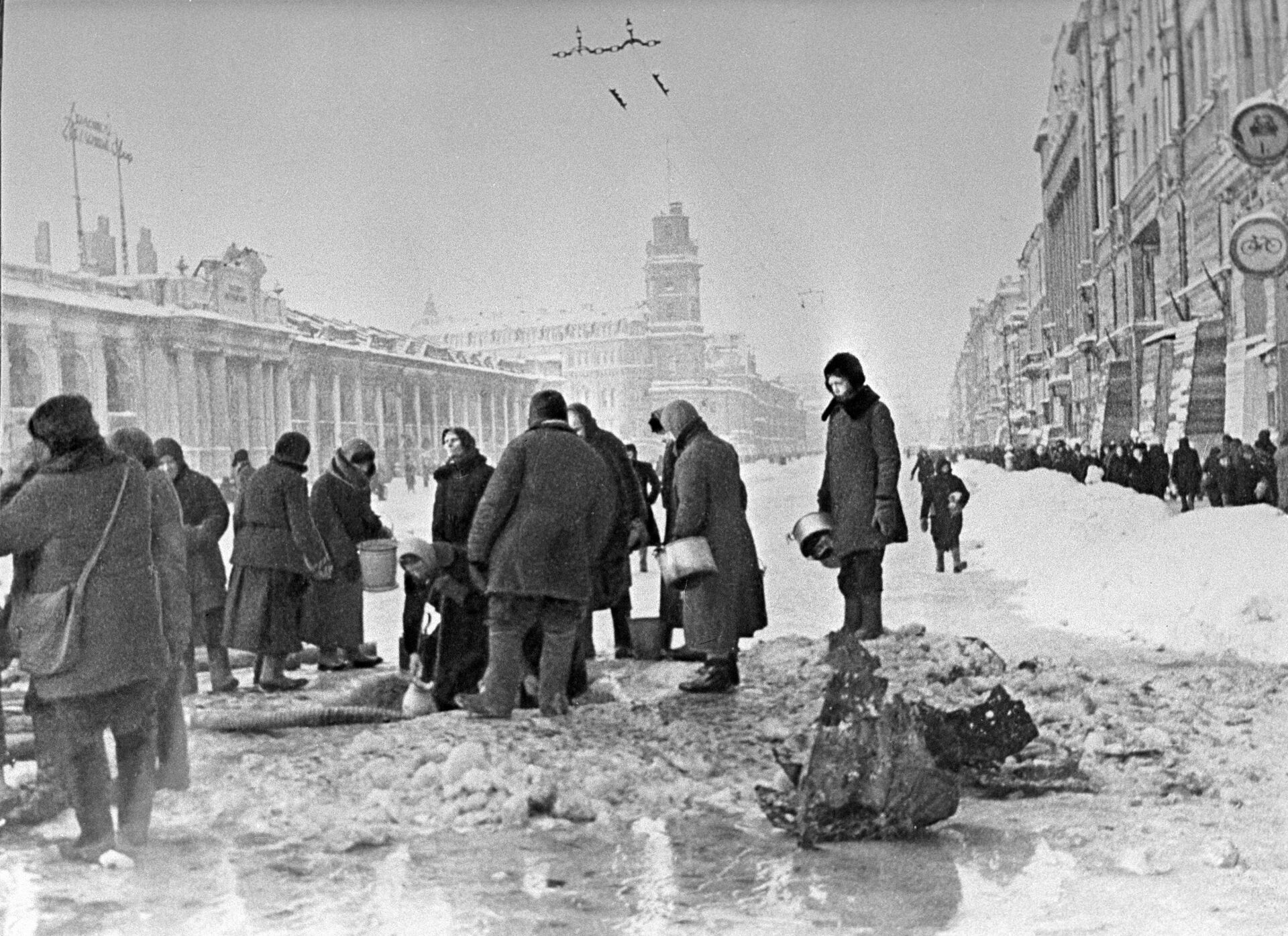 Residents of Leningrad / Go to the mediabankTanya herself was discovered by special nursing brigades searching houses around Leningrad, and along with around 140 children, was brought to an orphanage in August 1942. However, already too ill, Tanya died of tuberculosis on July 1, 1944.The girl never found out that not all members of her family had died, and that the missing ones had survived the siege. Tanya’s brother Mikhail suffered severe injuries in the war, but survived his ordeals. Her sister Nina, who had gone to work one day and never came back, had been evacuated out of the city across Lake Ladoga at a moment’s notice. © AFP 2023 / OLGA MALTSEVAA man visits the monument “Broken Ring” dedicated to breaking of Nazi’s siege of Leningrad on the shore of Lake Ladoga in the Leningrad region on January 13, 2023. 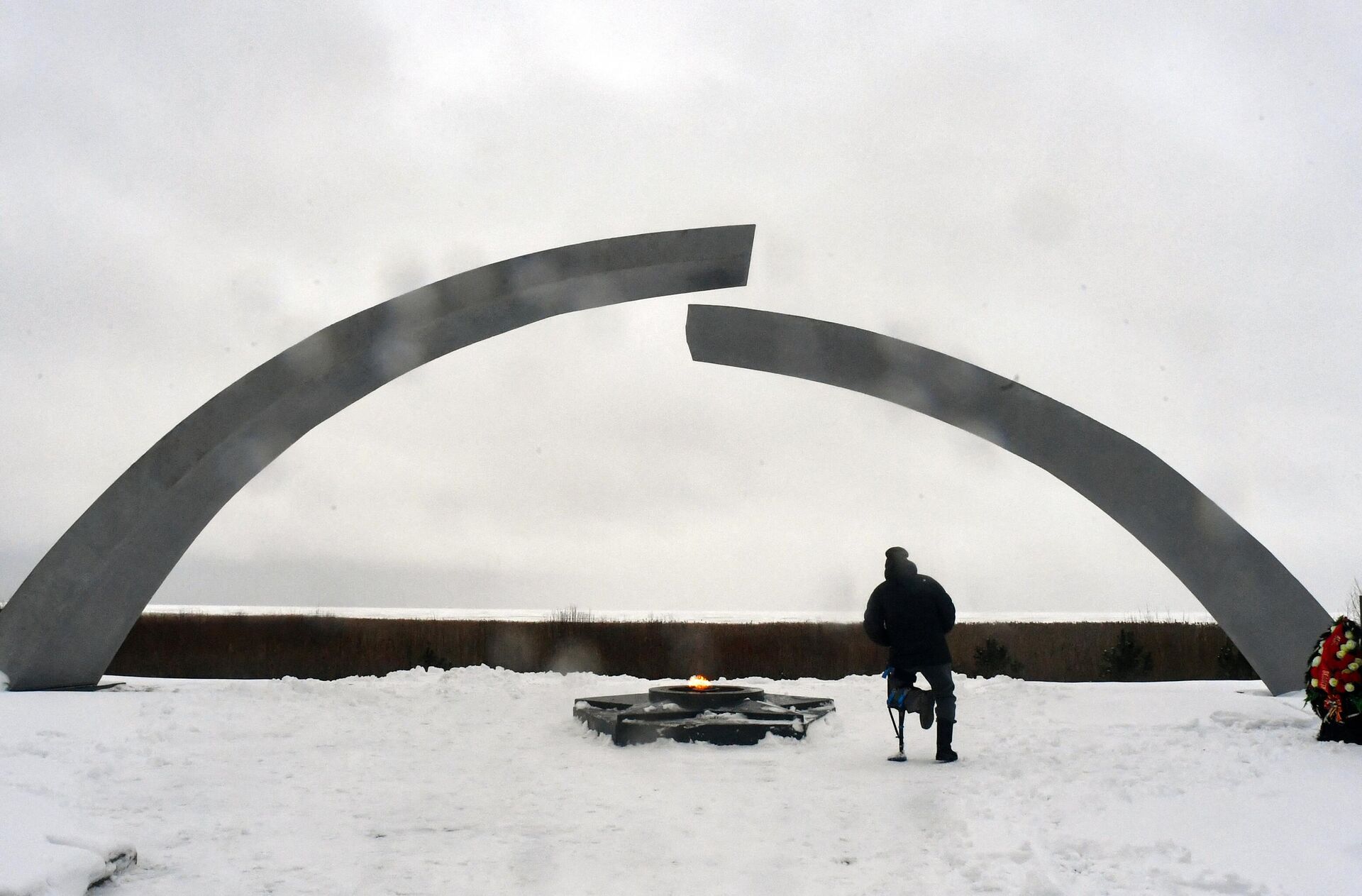 A man visits the monument “Broken Ring” dedicated to breaking of Nazi’s siege of Leningrad on the shore of Lake Ladoga in the Leningrad region on January 13, 2023. Returning to Leningrad after the war, it was Nina who found the notebook amidst the ruins of their home. Nina gave the diary to a newspaper journalist, and so the short legacy of death left behind by the Russian schoolgirl became a symbol of the horrors of the Siege of Leningrad.© RIA Novosti . Shimanskiy / Go to the mediabankLeningrad in 1943, during the siege in WWII. 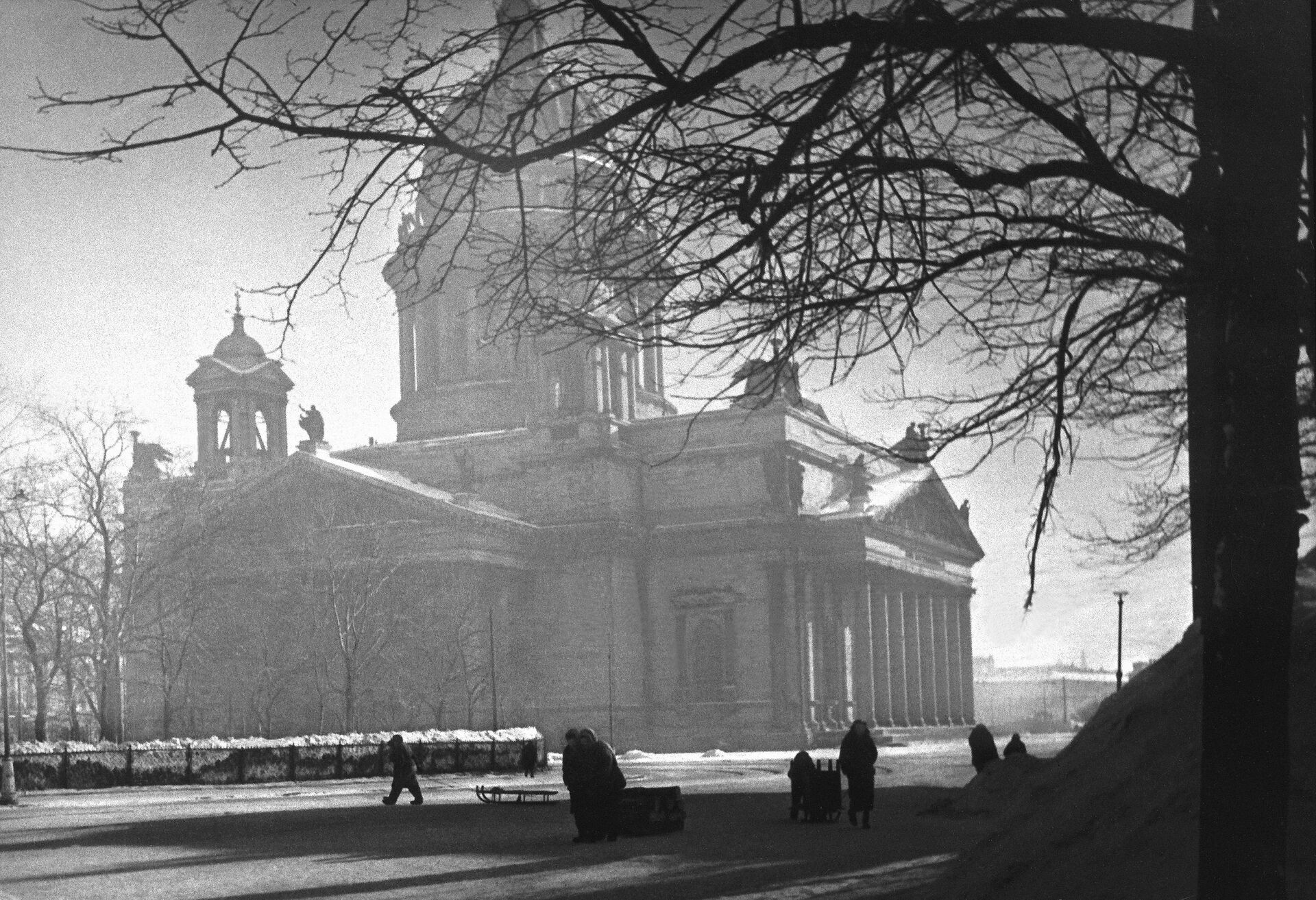 Leningrad in 1943, during the siege in WWII. / Go to the mediabankTanya Savicheva is buried at Krasny Bor cemetery in Nizhny Novgorod Oblast. Tanya’s notebook was presented at the post-war Nuremberg Trials as documentary evidence condemning the terrors of fascism. Today, the diary is on display in St. Petersburg, in the Museum of Leningrad History.© Photo : Arzy ArzamasTanya Savicheva’s grave at Krasny Bor Cemetery, Russia 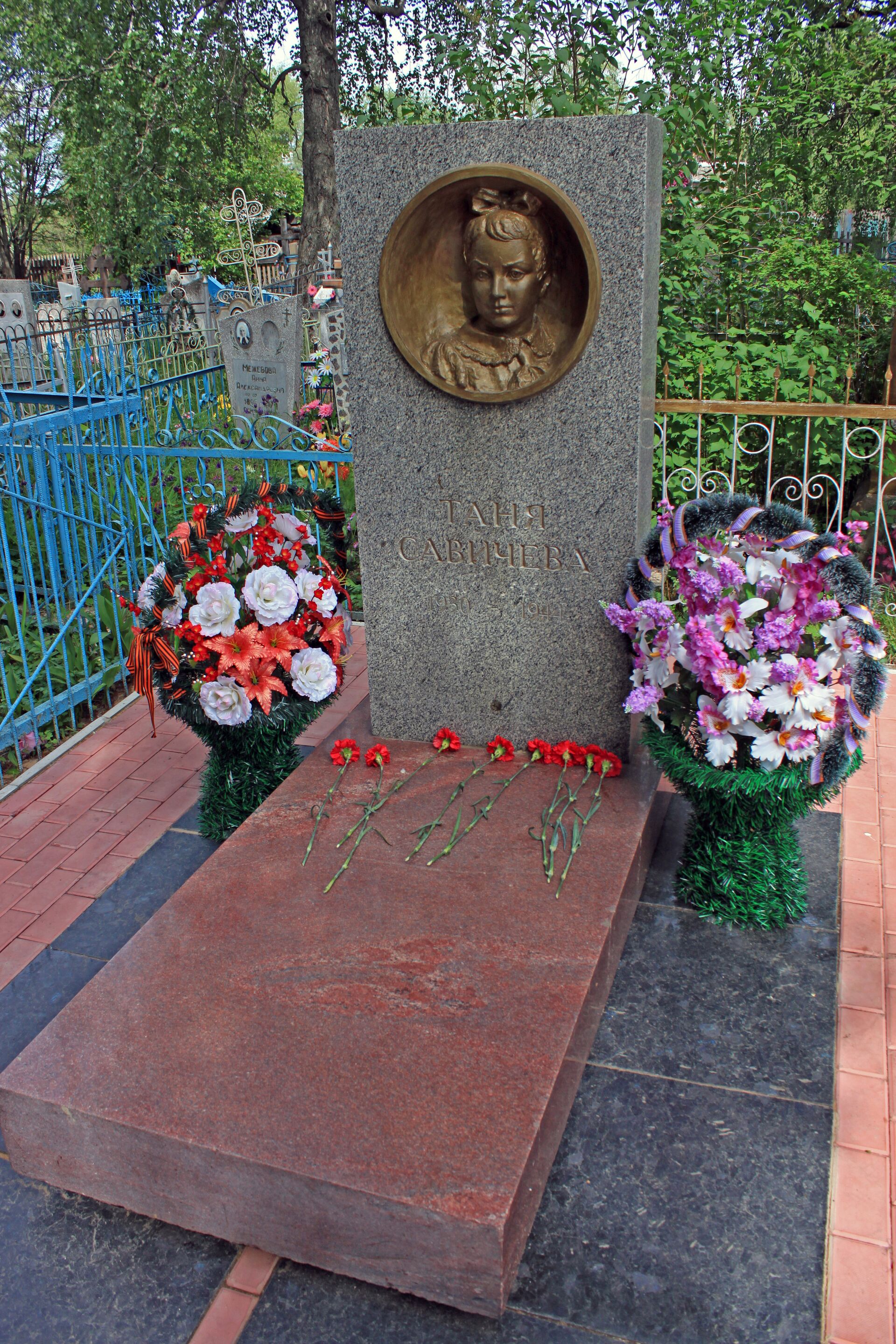 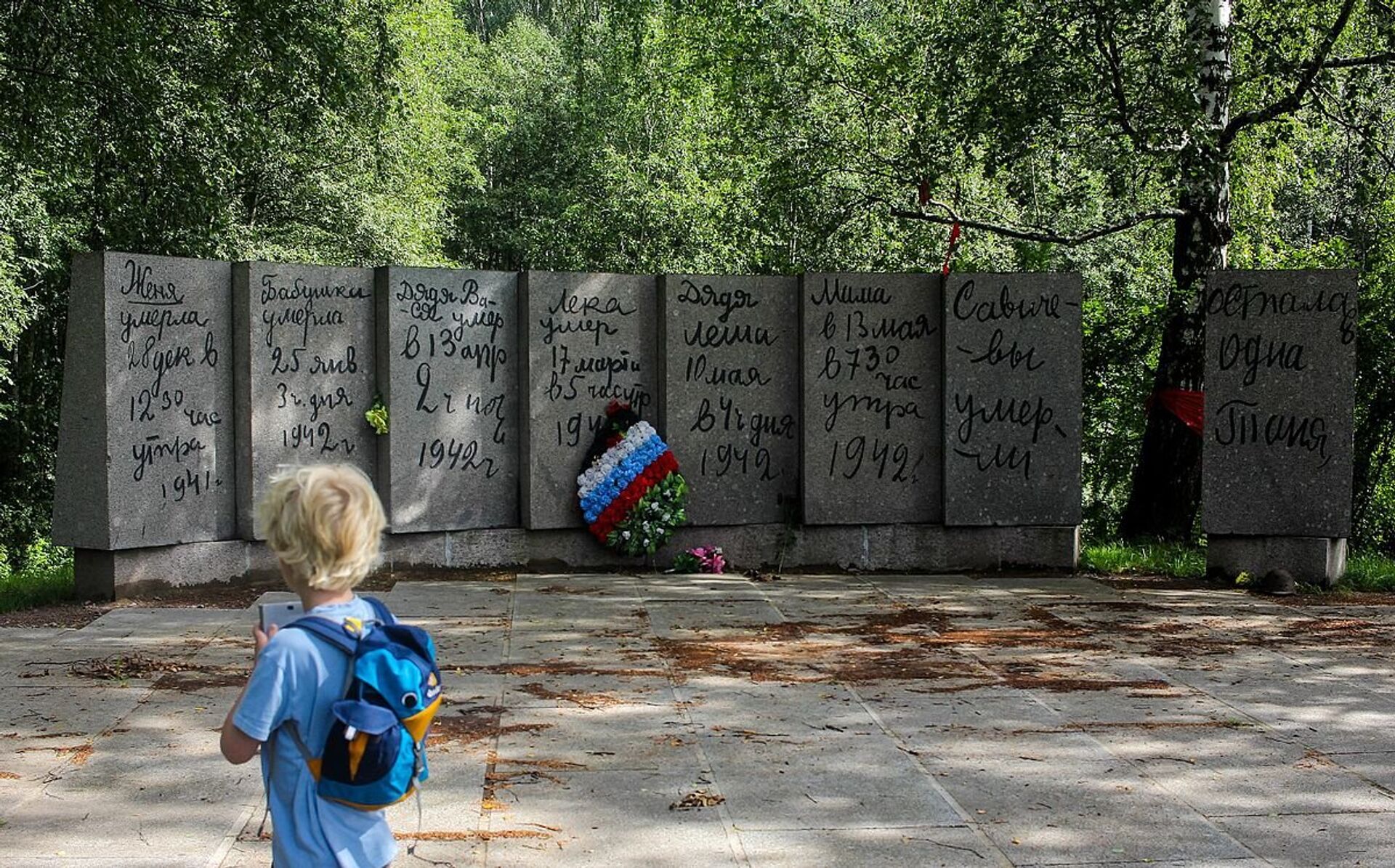 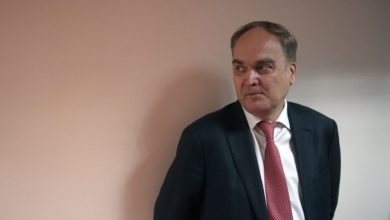